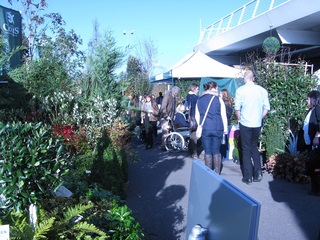 Given it was a question that made the audience prick up its ears, it was a shame that Mark Gregory, Managing Director of Landform Consultants, couldn’t remember the answer. But perhaps it was forgivable in someone who’s been contracting since the early ‘80s. How, asked a member of the audience, do you make the move from being good in your area to the next step up?

It was a question posed to four of the landscaping industry’s big hitters in The Beauty is in the Build, a forum held at ProLandscaper’s show, Futurescape, on Tuesday. David Dodd, Ken White and Dan Flynn joined Mark to give the low-down on how they run their businesses.

David, who started as a “one-man band with a beaten-up old pick-up”, made a loss on his first big project but kept it manageable by breaking it down into a series of individual jobs. “It took us nine months and if I did it again it would take six,” he said, “but it gave us the confidence to know we could do it.” 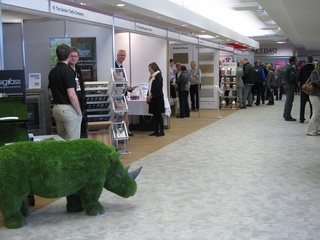 Mark’s memory filtered back. He always knew he wanted to work at the “top end of the market” and clearly had a high-octane approach. “I was in my early 20s and felt I could conquer the world. When I look back on the risks I took as a young contractor…way above my station.” What he ensured, though, was that the projects were safely funded by his taking big deposits. Self-belief, confidence, enthusiasm and hunger for success combine to let you “walk away with work”, he added. “You don’t get anywhere by avoiding risk,” he said, “and landscaping is a high-risk occupation.”

Ken was less gung-ho. “None of us really makes the conscious effort to be Here and go There. It’s organic. A lot is about passion, understanding the brief, and looking for what it is the client is trying to achieve.”

And, in an industry where the weather “is always against us,” Dan Flynn stressed the importance of being prepared: “Your reputation is your previous job. Whatever level you are at, you’ve just got to do it well.”

This was one of the 20 open seminars and forums held during the day and was surely one of the most popular with the audience packing the large Desert Orchid Suite. The seminars were, without a doubt, a big draw. Early in the day, Stephen Firth of Merrist Wood College confirmed, “It was the best show for seminars last year.” 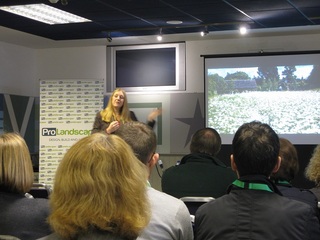 Occasionally one felt one hadn’t attended quite the seminar expected. John Wyer’s talk, described as exploring “how to stay one step ahead of the competition, how to exploit new markets and how to get the most out the resources that you have”, interesting as it was, concentrated almost exclusively on using social media.

It paid to pick your seminar carefully, especially if you were looking for practical know-how. The garden design emphasis was strong in some. Anne Wareham’s talk on Water, considering some of the worst and best aspects of its use and how we could do better, would have disappointed anyone looking for more technical information on the placing of ponds. And where the easiest source of examples and images is one’s own work, as it was for Ann-Marie Powell’s talk on Plants and Janine Pattison’s on Sustainable Landscapes, the thought that the lecture is a great way to showcase one’s garden-design triumphs is probably unkind.

Other seminars on Managing Slopes, Using Green Compost and Rainwater Harvesting promised greater depth for those at the sharp end of building a landscape. 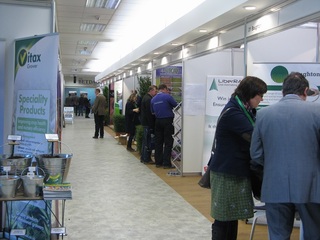 With the problems faced by shows in recent times, the question remains as to how useful an event like this is to the industry. It was certainly an enjoyable day out, the chance to interact with well-known figures, make acquaintances, exchange stories, meet suppliers. The feeling in The Beauty is in the Build was that everyone attending would be interested in progressing, expanding knowledge and business. But, said Mark Gregory, “Seventy-five to eighty percent of the industry isn’t interested in innovation, research, health and safety.” Harsh, or accurate? Or is it that the information on how to run a landscaping business day-to-day and practical demonstrations of required techniques isn’t there to attract the large percentage of the industry that doesn’t attend?

This was Futurescape’s second year and attracted considerably more exhibitors, with the number of stands – 89 – almost double last year’s count. Around 60% of those exhibiting last year returned. Newcomers included industry associations APL, BALI, e-FIG and the Society of Garden Designers. While some companies were of more interest to large contractors, such as urban tree specialists Greenleaf and compliance consultants Penarth Management, companies offering decking, resin drives, pots, plants, wildflower turf, and artificial grass were among those catering for smaller concerns.

Out among the stands, the popularity of the seminars made the aisles look empty at times but exhibitors seemed happy. The Plantcare stand reported good footfall throughout the day, and Howard White of CED agreed. They’d been extremely busy, especially at lunchtime, and, he added, morale was good. “At some events people go around with their head down, depressed-looking. These are positive, happy people.”

So, let us know. If you went to Futurescape, how useful was it for you and does Howard's view agree with yours? James Mead, Grounds Manager at the world-famous Rugby School in Warwickshire, has revealed why he has used MM50 grass seed for the last ten years.

Rugby School, founded in 1567, is one of the oldest public schools in England, and is…

Ewan Hunter, Grounds Manager at Nottingham Forest FC, has praised the products and service he receives from Mansfield Sand.

After starting his career as a greenkeeper, Ewan Hunter moved into football grounds management and has remained in…