Vic Demain, Durham CCC head groundsman, says that the Dennis Razor Ultra 560 fine turf mower has made a significant improvement to the pitch at the Emirates Riverside stadium and in particular has praised the groomer reel attachment.

He was the first ever cricket groundsman to win the Professional Groundsman of the Year in 2017 and just last year his team was named Professional Cricket Grounds Team of the Year. It is without doubt testament to the incredible job he is doing at the Emirates Riverside. To say that Vic is constantly striving for improvement is an understatement. 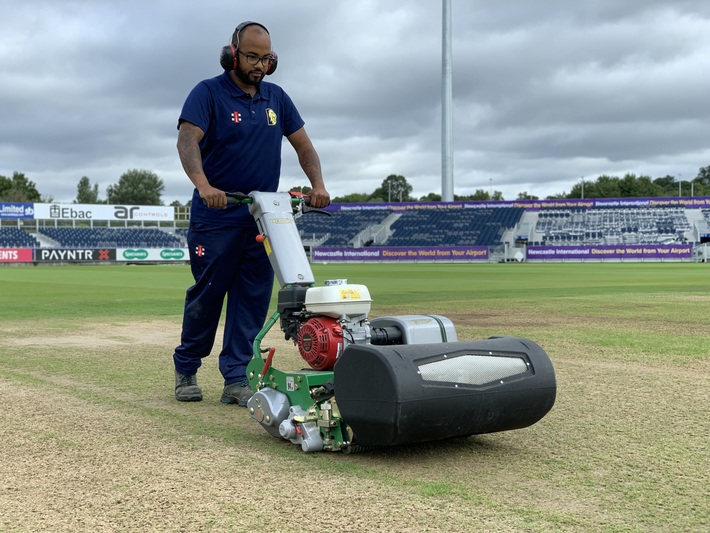 “I’m someone who constantly needs to be challenging himself,” he says and candidly admits to facing a number of trials throughout his five-year tenure at Durham.

“When I first came here a lot of the equipment was aging and money hasn’t particularly been forthcoming so we soldiered on with what we had,” he said.

However, Vic claims that his most recent addition of the Dennis Razor Ultra 560 fine turf mower has made a significant difference to his pitch preparations.

Before purchase, the mower was demonstrated at the Emirates Riverside and there was something in particular which caught Vic’s eye. 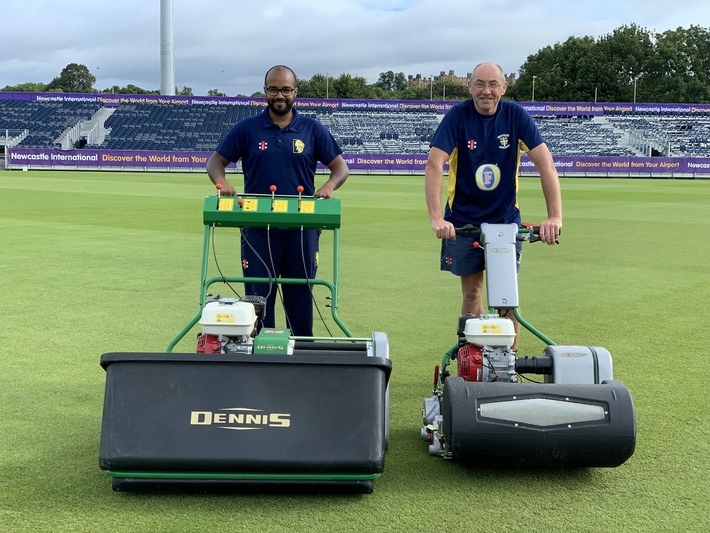 “The Razor Ultra has a tungsten tipped groomer reel and I’ve never really used one of these for cricket before. However, at the time I had a very good friend of mine with me who had come over from Australia to help out with the World Cup preparations. He is in golf now and told me that he uses groomer reels all the time. Needless to say, he was really impressed and so I decided to give it a go.

“It takes a lot of rubbish off the pitches such as creeping grasses and all the stuff that is lying down flat. This groomer simply flicks them all out and carries out a more thorough job than a cutting reel.”

Superbly balanced and ideal for cricket pitches and other fine turf surfaces, the Razor Ultra features a 560mm (22in), 11 blade cutting cylinder for a perfect finish. An ultra-short wheelbase ensures easy manoeuvrability and excellent performance, even on undulating surfaces. The Dennis Razor Ultra encompasses the simple ‘no tools required’ click height adjusters for quick and easy operation, a feature which Vic is particularly impressed with.

“It is so easy to adjust the height of cut with the simple click adjustor - half a mm here or half a mm there, depending on requirements, and it is not a question of running for the spanners or any other tools.

“I’ve been working with Dennis for as long as I’ve been in the industry and they have never once let me down.”

PRO
"Yes i agree i watch those videos myself  in fact i recently bought a lazer cut blade which came with sharpening instructions we can only trust the advice has being tried and tested and learn from experoence , I believe its possible to sharpen them…" 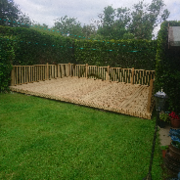 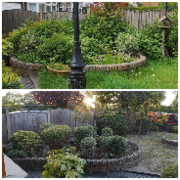 "Not heard about no sharpening blades. My dealers never mentioned that.
There's  Stihl how to sharpen hedge cutter blade videos on-line. I sharpen mine when there blunt. I find that once the touching worn down in the inside they just don't cut fine…"

"Some of the images below look pretty great, and we have found that there are usually excellent videos available from the trampoline manufacturers on Youtube. We have some videos from Berg. Let us know if you want to have a look.
Gary"

"I'd always use a hedge cutter for Stuff like that, especially renovation." "Well here are two examples of the problems - and to remind people... I have been doing the garden (2acres) on around 3 hours a week for the past 2 years or so - and tbh have followed the shape that the cones and spheres were.  We could quite easily…"

"I use mine this morning to cut the top off a laylandi hedge, it hadn't been cut for two years, it did fine. But I had to get the petrol poll saw out for a few bits.
You should try a demo one, I wish a brought them years ago!"

"Only ever own Stihl, but I've found long handled hedge cutter gear heads are only good for three- four years, on the older style of sthil. The new ones I can't say mines still going, but the blades are only really can't good for three years.
I Only…"

"There are others on here far better with machines than me, and I'm sure they'll be along, and I hope I'm not being patronising, but there should be a reason why the blades have seized. If you are using the hedge cutter a lot then I wouldn't have…"
More…
Loading ...

Any views on battery v petrol for a long reach pole trimmerI have had a petrol husqvarna for quite a few years but unfortunately coming to the end of its life I feel as blades have ceased (although this one is only 3 years old ! and maintained…

Battery indicates fully charged but does not operate ?

A 40 V battery i charged indicates full but doesn't appear to operate any machinery . The machinery is all ok Does anyone know what the problem could be or suggest a solution to save the hassle of returning it to the manufacturer even though its…

Hi All,Can anyone identify the problem on these viburnum. They are planted this year and were fine until a few days ago. They were sprayed with liquid fertiliser last week mixed with pesticide..... at least I hope thsts what it was.. Paul

In the US, the personal touch still works in a digital, distanced world for Stihl

https://www.bloomberg.com/news/newsletters/2020-09-13/why-stihl-still-sells-chainsaws-in-stores-despite-coronavirus-pandemic?utm_content=businessweek&amp Explains their stance regarding direct sales Vs online sales (certainly in the US, and I…