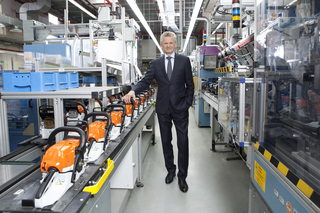 "Last year the STIHL Group's turnover surpassed the 3 billion euro mark for the first time and by a considerable margin", said STIHL executive board chairman Dr. Bertram Kandziora at the company's financial press conference. Worldwide turnover in 2015 was up by 8.9 percent to EUR 3.25 billion. Without the effects of foreign exchange rates the increase would have been 3.7 percent.

"In 2015 our sales subsidiaries in most countries again succeeded in gaining market shares and this enabled us to further consolidate our global competitive position", said Dr. Kandziora. "Worldwide investments in 2015 totalled EUR 235 million, which is higher than they have even been in the company's history. We are celebrating our company's 90th anniversary this year and are well prepared for further growth." All investments are equity-financed as a matter of principle.

North America is growth engine
The situation in international markets was quite varied for STIHL in 2015. "North America was once again the growth engine with a double digit increase in unit sales. In the U.S., there were gains in market share in almost all product groups. STIHL also made significant progress in Latin America", explained Dr. Kandziora. Western Europe, including the southern European countries, also reported growth.

By contrast, the chain saw market in Russia collapsed. The slump in the ruble's value, the teetering economy and the falling price of oil resulted in purchasing power being practically halved, so that the total sales of products in Russia dropped drastically. Overall, market shares were gained worlwide. An encouraging level of unit sales growth was achieved with VIKING products.

The STIHL and VIKING Test Day, which took place for sixth time on April 9, 2016, is the traditional start to the season for dealers. The STIHL COMPACT cordless system further extends the line of cordless power tools. The new products will be available as from this summer. Further test opportunities for customers are scheduled as part of the "Super Saw Weeks" in autumn.

Worldwide investments at all-time high
The STIHL Group's investments last year amounted to EUR 235 million – the highest they have ever been in the company's history. Of that total, the German founding company accounted for 37 percent and the subsidiaries at home and abroad for 63 percent. For example, ZAMA, a subsidiary of the STIHL Group, opened a new production facility in the Philippines in January 2016 which represented an investment of over EUR 40 million. Compared with investments, total depreciations amounted to EUR 149 million. The number of employees in the Group was down by 0.4 percent to a total of 14,245. "they sure are, there is a difference however between the power needs of a cordless drill for example and a gardening tool however. But am open minded as to their ability as makita seem to get a lot from those 18v packs. i have one of the job site ra…"

"Thanks for the replies guys.
Billy op, at least their 18 v site tools are well proven technology. "

PRO
"I use the izy and it does quite a good job, tho I have upped the revs. Its does require regular cleaning of the deck as it gets quite thick with grass and the deck is steel so I give it a good dose of wd40. Keep the blades sharp too and it leaves a…"

"Anyone use a mulching izy 21 inch? It ticks all the boxes, lightweight, flap for stripes, duel use.£650 new."

"I bought a Parker brand leaf blower for my assistant a few months ago. It was less than £80 and presumably made in China. It is well-made and is a very good leaf blower. It started second pull straight from the box. It is so far at least as good as…"

PRO
"There is nowhere to screw a grease tube on. That's why you need to take the gearbox cover off and apply grease directly.
Suggest you take another look at the machine. We know this is correct thing to do as we have 4 of them. "

"I meant taking a screw out then screwing the grease tube on to top up, the battery hsa 86 does not have this
"

"This is the battery hsa 86 Nick it only has 2 torx screws holding a plastic casing over the gearbox, the gearbox gets the odd bit of cuttings in which is not ideal as it is not sealed like the petrol ones."

PRO
"On ours there are a several torx screws on the casing of the hedgecutter head...not one single tor's screw...."

"Nick, I always keep the gearbox topped up with grease, these dont have a lot in to start with and can just be cmeared in, there is no torx screw to take out."

PRO
"I would grease the gearbox - it's only a few screws to undo the cover."

"Let me know how you get on with it am in no rush for my new roller i keep looking"
More…
Loading ...

Does anyone use, or have tried the new makita professional battery kit?This has caught my eye......https://www.powertoolworld.co.uk/makita-duh604sz-18v-lxt-600mm-23-5-brushless-hedge-trimmer-body-only

Hi everybody,I hope someone can help, about 18 months agos i purchased the stihl long reach telescopic trimmer and was very impressed so bought the Hsa 86 last year as i already had 2 batteries and the charger, I was very impressed with this as…

Hi everyone, Personally I would not be buying anything made in China, Because of the covid 19  virus I believe there will be a kickback at chinese products and thus availability of parts. Never mind conspiracy theories, the chinese have covered up…